Sage Data & Analytics (SD&A) provided Advinia with meaningful reports through its’ user-friendly design within a short amount of time. 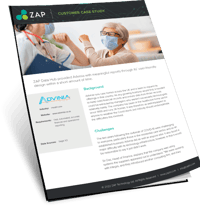 Advinia runs care homes across the UK and is keen to expand its offerings in that country. As any growing business would find, it needed to keep solid financial records and ensure data from those records could be extracted by managers who weren’t necessarily technologists relatively easily. The company has been in the healthcare home sector since 1999 and runs 36 homes. It was therefore as well-equipped as anyone to weather the Covid storm, but nobody should underestimate the difficulties this involved.

The two years following the outbreak of COVID-19 were challenging to everyone, particularly those in the residential care sector, and as an established business Advinia did as well as anyone else. It also faced a major difficulty with its technology infrastructure, however, in that it would be reasonable to say it just didn’t work.

Sri Das, Head of Finance, explains that the company was using systems the suppliers appeared not to understand. “We were working with Integra, and they introduced another consulting firm, and they didn’t know what the software of choice at the time was”. The companies took on the project but were working on understanding the technology while they proceeded. This wasn’t satisfactory for anyone; the chart of accounts was in place, but the pipelines and the flow of information were unclear.

Advinia went as far as logging on itself and trying to work out its system. The time was more than ripe for a change, and it would have been even if the world hadn’t been about to make residential care one of the most difficult areas imaginable.

The first thing Advinia did was to change its partner. It began working with CPI World as a Sage X3 Partner as it understood the product. Things started to improve immediately and then it suggested moving to Sage Data & Analytics (SD&A) powered by ZAP Data Hub. “When it came to SD&A we didn’t have a choice – our existing reports were broken and not meaningful,” says Sri. Nothing that came out was suitable for sharing with the board.

The new consulting partner, however, solved several problems immediately. “The partner was able to resolve a lot of what we were suffering just after a week – they spent a week and had immediate answers to a lot of our questions. So, we said: “If you can do that much, can you suggest someone who can do better on the reporting side?”. The answer was SD&A, and the benefits started immediately. When Sri joined the business in May 2019 it was finishing the January reports; by August 2021 working with SD&A, he had already issued the July information. “We can now issue our operation level pack by the seventh working day.”

Just as importantly, because it is cloud-based and the design is customizable, the leadership team has access to it wherever they are and, in a format, they can grasp quickly. This is underpinned by solid technology, which appeals to Sri. “It’s a robust data platform and if you work with people who understand it, it comes out brilliantly well.” From a company that had once resorted to running a multi-site, complex business from a single Excel spreadsheet, this has come as quite a relief.