“In terms of financial reporting, ZAP Data Hub has transformed the time it takes from days to minutes. In terms of creating new reports, with ZAP Data Hub I can build one and have it in a dashboard and up for everyone to use in about an hour or so.” 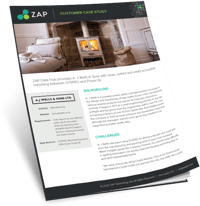 A. J Wells is a privately-owned, family-controlled business focusing on the design and manufacture of high quality stoves. It also manufactures vitreous enamel products and imports fair trade tiles and pumice chimney. It began in 1972 as a small engineering business on the Isle of Wight and has grown from the original three staff to over 100, now occupying a factory of over 50,000 square feet. Rob Holgate joined the company in 2019 as head of finance and immediately noted that although the managers’ instincts were good, they needed to be supported by better quality data.

A. J Wells had been using SYSPRO for almost a decade and a half and from the manufacturing and planning point of view it was excellent. When Holgate joined the company, however, he noticed some difficulty in getting information out quickly, financial reporting and being able to spot (and substantiate) trends.

“We were previously using Crystal Reports. One of our finance team had learned Crystal inside out and was the only one really who could really build reports. So skills were siloed but also you’d often get a great report built out, but when you needed the same info in an Excel spreadsheet, it could take half a day of reformatting!”

Coupled with the lack of a dedicated financial director, the system wasn’t anywhere as flexible or adaptable as the business required. Different sales executives were putting information in using different
methods so the CRM system didn’t quite agree with the accounting system.

Holgate found ZAP Data Hub by Googling. He faced the task, as a new member of staff, of having to tell senior management that their existing systems were not up to scratch and persuading them to spend money on a replacement.

“A. J Wells has been using SYSPRO as its ERP since 2005. They’ve found it works very well from the manufacturing point of view, and planning all your production. Though they did have a challenge in getting financial reporting out quickly, and being able to spot trends. They had a very good gut feeling for the business, but the actual data to back up the gut feeling was always very difficult to get to. I started to look around, we looked at Power BI, connecting the tables, and I just did a Google search for SYSPRO, Power BI and ZAP came up!”

Prior to implementing ZAP, Holgate embarked on an in-house data warehouse build, and using his own skill to interrogate the SYSPRO system for financial reports. But he quickly hit a proverbial brick wall, not because of skill but because of the time it was taking. It was then that he called in ZAP to bring automation to the process.

“Being able to demonstrate extra information, extra trends that the business had never looked at or viewed before - that was the primer to realising that we need to go with a proper system, and that’s why we ended up with ZAP.”

ZAP Data Hub quickly built out the data warehouse and integrated all relevant data sources, although Holgate doesn’t regret trying the inhouse route first as it did get him into the habit of getting data in and out of any system cleanly and tidily.

The company adoption of ZAP Data Hub solved their data management and analytics problems immediately. The result is a better business with high quality information about which parts are yielding the most profit.

“As much as I enjoy building reports and the challenge of doing that, the real challenge is to spend more time looking at the data rather than building the reports! Initially at A. J Wells, it took so much effort to get the right data that people had lost energy by the time it came to interpretation. Or the end user was coming back with small amends which lead whoever had spent three days assembling the data to pulling their hair out!

“Whereas now, now we can have the data there: it’s good, it’s clean, it’s consistent. It’s on a timely basis. We can actually spend our energies looking at the data, and looking at the trends. And then being able to make the business decisions based on that.”