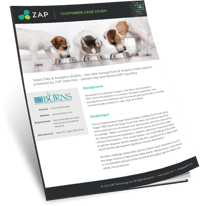 Prior to implementing Sage Data & Analytics (SD&A), Burns was using Sugar CRM, Excel and Sage X3 for their sales and financial reporting, which required a lot of manual work and became very time consuming to manage. “Within accounts we would do manual exports from Sage X3 using printout and requestors,” explains Jake Pyle, Financial Analyst at Burns Pet Nutrition. “This would require a lot of formatting of the data to get the required reports needed. We also used Excel for a daily sales report but this still required significant manual intervention.”

Another challenge arose when ad-hoc reports were requested. Due to the large volume of data stored within Burns’ infrastructure, it was taking a considerable amount of time to format and adjust reports which was simply not productive.

By mid-2020, the team at Burns decided that enough was enough. Too much time was being taken up by manual report building and not enough spent on wider business projects. This was around the time SD&A was first introduced to Burns by their technology consultancy partner and Sage X3 provider, Mysoft.

With over 250 cumulative years of Sage X3 experience and 45 (and counting!) successful ERP software projects under its belt, Mysoft’s Sage X3 knowledge is unrivalled. Winner of the Sage Excellence Partner of
the Year 2019 and a Sage Gold Business Partner, they’re also a longstanding recommender and reseller of both SD&A and ZAP Data Hub.

After Mysoft and ZAP delivered a demo of SD&A, 2 months later the solution was installed and in daily use, along with a first project to build a sales dashboard which would automatically be distributed to the sales
and finance teams daily. From that point onwards, Burns was able to build numerous reports on both a monthly and ad-hoc basis in a fraction of the time spent previously.

This new and improved reporting solution for sales data was so well received by internal stakeholders that Burns has also since started using SD&A for management reporting.