"After two weeks working with ZAP Data Hub, the infrastructure and software were in place and information was flowing from AX to BI. Within 6 weeks we were delivering reports, dashboards and KPI’s to our user community!" 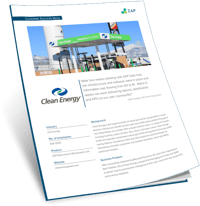 Clean Energy is the largest provider of natural gas fuel for transportation in North America, fueling over 30,000 vehicles each day at 360 fueling stations throughout the United States and Canada. With a broad customer base in a variety of markets, including trucking, airport shuttles, taxis, refuse, and public transit, Clean Energy builds and operates compressed natural gas (CNG) and liquefied natural gas (LNG) fueling stations; manufacture CNG and LNG equipment and technologies for themselves and other companies: and develop renewable natural gas (RNG) production facilities.

After successfully implementing Microsoft Dynamics AX within their organization, Bart Frabotta, CIO of Clean Energy, realized that leveraging AX Cubes and SSRS to deliver reports and business intelligence to their user community was presenting some serious obstacles.

Bart’s team invested two months’ of internal resources and $200K of consulting to get the inherent BI cubes in AX setup and get a basic view of the data. However, they quickly found that the work and time needed to make these cubes useful for their environment were not dissimilar to building a BI tool from scratch.

It quickly became clear that Clean Energy would have to look to purchase a Business Intelligence solution to extract the wealth of data they had stored within their AX system.

Bart knew from past experience that Business Intelligence solutions such as Cognos and Business Objects were going to require a significant investment in money and time to implement. Working with these vendors previously, he knew that he was looking at spending roughly 9 to 12 months for installation and $1.5M before he had his first report.

Knowing that the only other option he had would be to build his BI internally, thereby requiring that he not only grow his IT team but hire on external consultants; Bart began the RFP process for vendor selection as well as creating the business case his senior management team would require for such a large expenditure.

After a couple of calls with ZAP, Bart decided to put his RFP process on hold and give ZAP a chance to test-drive within Clean Energy’s environment. He was delighted with the outcome and purchased ZAP.

Within 2 weeks Bart’s team had the infrastructure and software in place and information was flowing from AX to ZAP Data Hub. Within 6 weeks, they had all of their customization data (which was extensive in their AR Module) going into ZAP Data Hub and they were delivering reports, dashboards and KPIs to their business community.

It was a major win for Clean Energy as an organization. They felt it further validated their decision to go with Microsoft Dynamics AX in terms of being even more beneficial to their user community. It was also a huge win for Bart and his IT team. Without having to add any extra resources, they were able to deliver the required information to the various stakeholders within the business… and they delivered a complete BI solution in 6 weeks!

ZAP Data Hub works out-of-the-box with Dynamics AX. It requires only minor development work to pull in customizations, integrates into SharePoint and Microsoft Dynamics CRM. ZAP is much less costly to implement compared to other BI tools on the market.