“Prior to using ZAP Data Hub, it was frustrating to tell our stakeholders, ‘no, we
can’t produce that report’” 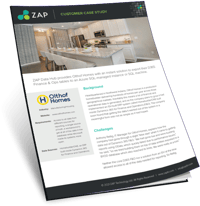 Headquartered in Northwest Indiana, Olthof Homes is a production homebuilder delivering hundreds of homes per year across three geographical markets. Inevitably this means a lot of financial and operational data is generated, and as the company plans to grow it had implemented an ISV-built ERP system called HomebuilderONE built inside Dynamics 365 for Finance and Operations (F&O). The company soon found that getting the data it wanted out of the system in a meaningful form was not as simple as it had hoped.

Anthony Rettig, IT Manager for Olthof Homes, explains how the company had gone through a slight ‘false start’ when it came to getting data out of Dynamics 365 F&O. “We had gone live and were building reports using OData, which quickly failed due to performance issues,” he said, ”so we tried building them on top of data entities exported to a BYOD database which also reached its limits. We were really at a loss.”

Neither the core D365 F&O nor a solution from an ISV at the time allowed access to all of the data needed for reporting. So Rettig went back to the market with two problems to solve. The first was easily articulated but seemed difficult to fulfil; the company needed a data warehouse to function as a single source of truth for all reports. Secondly, he needed access to all of the data in the D365 F&O database while Microsoft prepared to make its forthcoming solution to allow the export of tables to an Azure data lake in near real time.

He spoke to two different vendors, and it became apparent that he was looking for something that simply didn’t appear to exist at that stage. “Neither had solved the problem of access to data and were proposing what seemed like an unreasonable solution, and that was to create data entities for each table we needed for reporting,” he said.

Then a friend suggested he looked at ZAP Data Hub.

Rettig was floored to find that ZAP Data Hub answered all of his questions immediately, without waiting for a fix from Microsoft, and without the need for extra technical input:

“ZAP Data Hub can extract data from tables in Dynamics 365 F&O. Let me say that again in a different way just in case it’s not clear because for those of us in this space it sounds too good to be true! ZAP can export data directly from Dynamics 365 F&O tables to an Azure SQL-managed instance or SQL Virtual Machine.”

He admits to being surprised that while the world has been waiting for Microsoft’s own solution to emerge, ZAP has been offering an alternative functionality quietly in the background for some time. “While it’s not real time data, it is complete, it is easy to use, and it is very reasonably priced for the value it provides.”

The biggest benefit the business achieved was the ability to produce reports when stakeholders need them. “It seems elementary but, prior to using ZAP Data Hub, our hands were tied,” he says. “We’d have to say ‘no, sorry, we can’t build that report because we don’t have access to that data without getting a D365 F&O developer involved’.”

But now Anthony would go as far as to say that he would advise people not to develop their own D365 F&O connector or to employ a developer to expose tables via data entities. He believes both would be a waste of time given what ZAP Data Hub delivers and indeed what inevitably will come from Microsoft: “I wish I had enough time to spend hours letting people from other companies know that there is a readily available solution to the pain they are in the middle of,” he concludes.